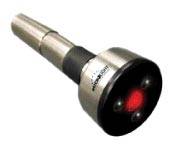 Landen Chiropractic PC is the first clinic in Northwest Nebraska to provide access to the ML830 Laser. This revolutionary new treatment utilizes photons of light to augment the body's natural healing abilities. The laser is different from what most of us picture as a laser. It falls under the category of a "low level laser" and emits non-visible light that has no heating or cutting properties. Treatment is completely painless and provides true healing power. All light has some penetration properties but most wavelengths of light are absorbed by the outer layers of skin, creating heat and often damaging tissue (much like a bad sunburn). The ML830 Laser emits light at a wavelength of 830 nanometers, which is unique in allowing deep penetration without a thermal or heating effect. In fact, Microlight Corporation (the manufacturer) patented this particular wavelength because it provides the deepest penetration among all low level lasers. It is also the only wavelength currently approved by the FDA.

The ML830 Laser is a painless, noninvasive laser that has demonstrated significant benefits for patients around the world including:

Treatment with the ML830 Laser is painless and treatment typically lasts between 10 and 40 minutes. The laser emits non-visible light at a wavelength of 830 nanometers. These photons of light are capable of stimulating cells up to 5 centimeters below the surface of the skin, making it the deepest penetrating modality currently available. Research has shown that these photons are specific in stimulating only tissues that have been damaged, leaving normal tissue unaffected. Changes begin at the cellular level as the light stimulates the mitochondria (the power source of our cells) of damaged cells resulting in a cascade of cellular responses. This "photobiostimulation" energizes cells and accelerates the body's normal healing process. The inflammatory process is accelerated allowing for rapid pain reduction and faster repair of healing tissue. In addition to speeding the rate of healing, the ML830 Laser also augments the strength of the tissue once it is healed. The ML830 Laser is unique in that it creates true healing rather than masks pain as in the case of ice, heat, and electrical stimulation. Because of this, great interest has been generated in high-level professional athletics and has fostered heavy utilization of the Laser in such arenas.